Reel Magic Productions has been around for over 20 years and Writer-Producer Wm. Alan Pezzuto (that’s me) has been in the industry for over 40 years. First Credit Film Academy was forged from the knowledge gained over those years.

So, here’s how it started.

For years, I worked in the industry on projects ranging from National Geographic through James Bond and from fat blocker infomercials to wedding and funeral videos. When I went out on my own to produce a feature length film for the music industry that sold over 2.5 million copies, it bankrupted me (no really, had the car repo-ed, lost our house and ended up sleeping in a buddy’s attic).

Then I signed a two-year television agreement as well as a deal to produce the accompanying feature film. The project was titled “Sailing, Seaports & Shipwrecks” and was to be an action adventure travelogue revolving around the several dozen sunken and lost cities around the globe.

We had a 90-foot schooner lined up to use for the circumnavigation and filming platform and were in the final stages of pre-production.  A set-sail date had been set and all was right with the world.

But alas, it was not to be.

I was bitten by a 670-pound Bengal tiger and lost the use of my right hand for a year and a half and the left for over six months.

As with any writer who has enough experience to be a writer, I could sit here and tell you about time spent with Capt. & Madame Cousteau aboard both the Alcyon and the Calypso, filming and diving for treasure with a number of modern day adventurers from Mel Fisher to the publicly traded Freedom Marine, having a couple hundred pound python crawl across me as I hid in a tree, and so on.  But I’ll save the stories for class.  Beware of the “No-shit, there I was” vs “Once upon a time difference.”

For the first six months after being bitten, I was unable to do things that one usually takes for granted, put on my socks, pick up a glass of water, wipe my own butt…

Not only did I gain a greater appreciation for those with permanent disabilities, I came to the realization that the writing I had been doing between filming and production gigs was going to become my job. I, like everyone else, still had bills to pay.

For the next 20 years I wrote, sold and optioned dozens of scripts and screenplays. Some years were better than others. However, I always made above average income and was able to live indoors and eat.

Some of the time the cancellation was because the broadcast platform decided the subject matter was too controversial, sometimes too politically incorrect, sometimes just because they had put more money into another project so it took precedence. At the end of the day, other members of the Writers Guilds in both Canada and the US were joking with me about my being the most optioned, least produced writer they knew.

This was a bit like having the honor of beeing struck out the most or having your passes intercepted the most. Yes, it’s a record. However, not one that makes you beam with pride.

“Those who can, do, those who can’t, teach.”  I don’t know what moron said that, but I have heard it at least a thousand times in my life in various contexts.

Unfortunately, with a few exceptions, and maybe tenured teachers who do not stay current in their fields, this is blatant BS.

Although, you may be led to believe that you can learn to do everything from anima through brain surgery and anthropology to zoology by watching YouTube or some other website. IT’S A LIE!!!

THERE IS NO REASON TO GO TO “SCHOOL” FOR 80% OF THE JOBS IN THE WORLD!

Ok, that’s a lie. The reason is, school, like entertainment, is a BUSINESS.

Film school alone is a 3 BILLION dollar a year business.  No, really.

Add books, room & board, additional fees, etc. and you can add an extra 1-2 billion dollars.

After you have completed 4 years of “learning” they send you out in the world where you have less than a 2% chance of getting ANY job in the entertainment industry, let alone the film business or whatever specialty you received the additional certificate in.

So…for the next two years you kick around begging everyone you meet to let you on set.

At the end of the two years, you are either living at home with mom and dad, both of whom are wondering and asking when you’re going to get a job, or you’re married with a child and are either bartending or selling tract houses in San Bernardino while trying to “get in the union,” as the clock ticks toward the start of repayment of your student loans.

By this time, the Alumni Association, in cahoots with Admissions, will have convinced you that it is not your fault that you have not gotten a job in your field. “The Field has evolved” and now, in order to stay current, you really should get your MFA (Masters of Fine Arts).  Plus…this will defer the start date for repaying those student loans and it will only be another $100,000 or so to be assured a successful career “in the industry.”

Painters learn and evolve by painting, carpenters by building and filmmakers by making films.

You can sit in a classroom for four years and spend hundreds of thousands of dollars and not know how to actually focus a camera, block a scene or tell the difference between an XLR and ALR connection.

You can learn every “theory” there is and yet be clueless as to reality.

“IN THE LAND OF THE BLIND, THE ONE-EYED MAN IS KING”
Desiderius Erasmus
“Collecteana Adagiorum” 1500

FIRST CREDIT FILM ACADEMY is a one day a week (12-16 hours), 1-year program which gives you the hands on experience you want and need to actually get a job in the film and video industry.

ALL of your instructors/mentors are working professionals that have other shows and projects in production. These people are not only available as mentors but as networking contacts for the future. 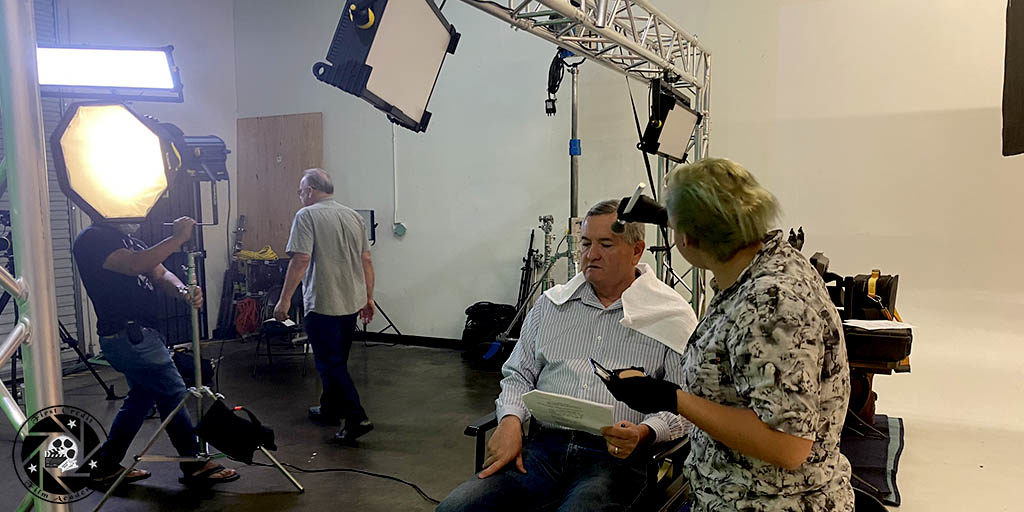 The reality is we all have bills to pay. Very few people have the luxury of not needing to work.  You will have the other six days of the week to do whatever you currently do to live indoors and eat.

The cost of the First Credit Film Academy program is $7,500 USD for the year with everything “required” included. There may be other things that you will want that may cost you extra; however, they will generally be restricted to the area in which you want to specialize. IE; if you want to do make-up, building your kit may cost you several hundred dollars. If you want to be a cinematographer or videographer, the ASC Cameraman’s manual will cost you a couple hundred bucks. 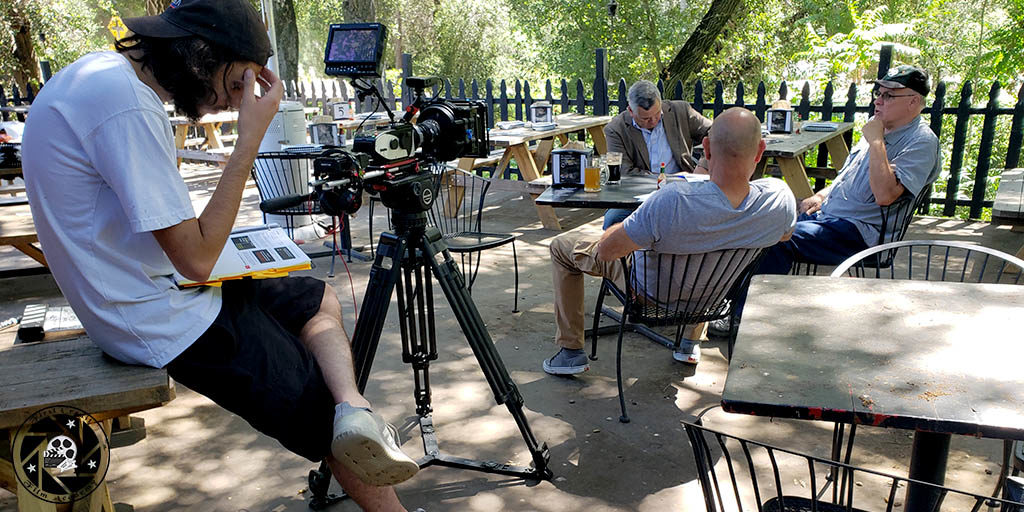 There are both partial scholarships and payment plans available. One of our goals at First Credit Film Academy is that no one leaves this class with student debt. That is a huge burden when starting out.

From the very first hour of class you will be introduced to and working on an actual feature length film and video project.

We don’t care what you know or don’t know coming into the program. What we do care about is that at the end of the program you will have something to point to and say “I was a grip on…” or “I pulled focus on…,” “I coordinated transportation on…,” “I was kidnapper number 2 on…” “I wrote revisions for…” or whatever it is YOU want to do in the industry.

Two projects have been selected for the 2020-2021 session. Regardless of which one you are primarily assigned to, everyone is credited on both projects as assistance will be needed back and forth during production. These projects will be shot in Southern California in Riverside and Orange counties. 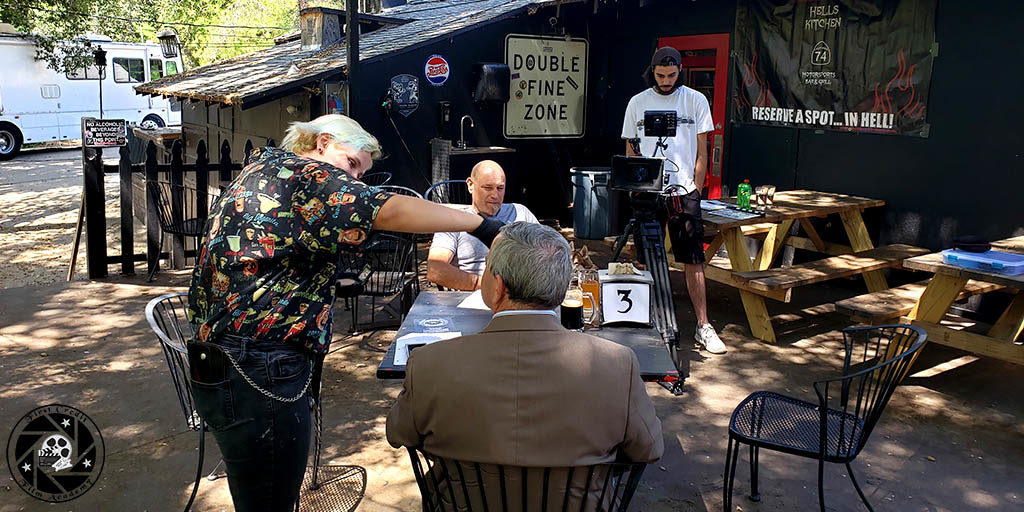 We will be accepting 125 applicants into the program based upon what THEY want to do in the industry and what is needed to successfully produce the project(s).

These are actual working projects with one being produced for the festival circuit and the other for commercial release.

Once we have an idea as to who wants to do what, we will break everyone into their respective departments: Producers Unit, Directors Unit, Screenwriting team, Production & Set Design, Grip & Lighting, Art Director, Costume, Cinematography/Videography, Music, etc.

Those wanting to be actors will be given the scripts on day one and auditions will be held on days 2-6.  It is expected that anyone wanting to be an actor recognizes that they will need to study and memorize their lines in order to be off book by week 10. 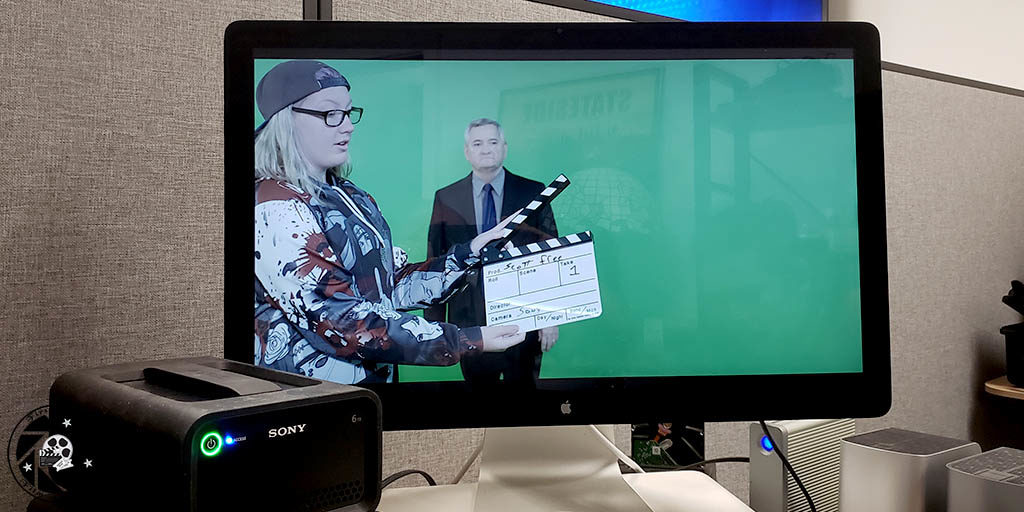 Our projects are truly independent feature films. As such, we do not and will not have the luxury of a “cast of thousands” to support us. Although everyone will have an area in which they want to focus, everyone will need to wear more than one hat. 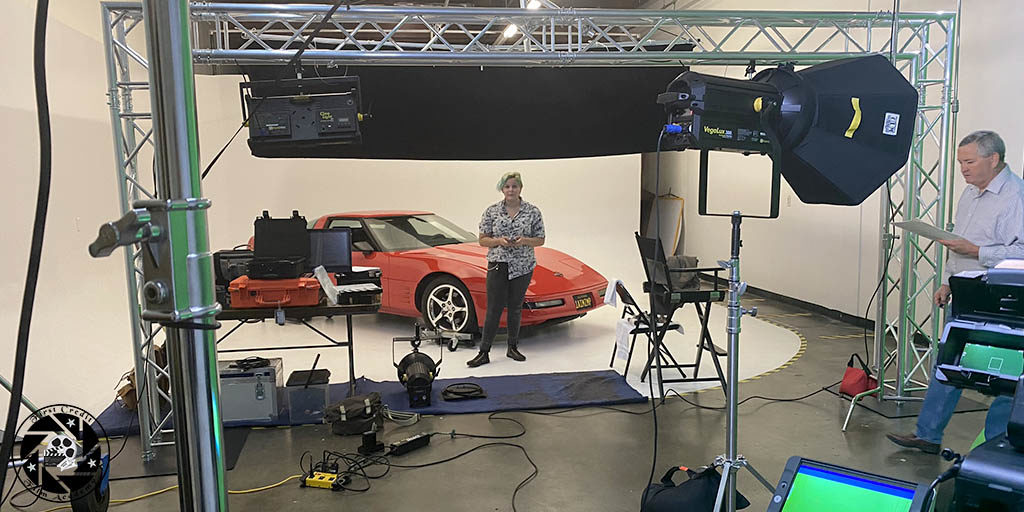 I FORGOT TO MENTION

25% of each First Credit Film Academy project will be owned by the project participants equally.

What we are doing is dividing each project into 100,000 shares (non-transferrable/non-registered) with each of the 125 participants that complete the program receiving 200 shares.

That means that if/when the commercial project hits abut $5-7,000,000 you will receive your tuition (minus any financial aid given) back. The shares and any future residuals would also be yours. Who knows? It could happen.

NOTE: Due to the current situation with COVID-19, we have not yet set a start date for the next session. Leave your email address below to be notified as soon as the start date is determined.